Back in 2015, when I started looking more closely into the historic specifications of Vienna Lager, one question where I started speculating and couldn’t really get a good answer was the question of colour. I based this off historic records that I had found in one of Ron Pattinson’s books, “Decoction!“. The provided value of “6.3” (no units) seemed reasonably close to be SRM, but as Ron commented below my posting, the beer colour is not in SRM, and that he’s not sure what exactly it is.

Well, today I can proudly proclaim that I have finally discovered not only what the “6.3” means but also how the value relates the modern beer colour units like SRM or EBC.

The whole thing started with me finding the original source for the specs Ron had put in his book. In fact, I had found these specs reprinted in several other books, as well, but all of them lacked information what the colour value actually meant. The original source is an article in Dingler’s Polytechnisches Journal, “Untersuchung der Biere, die in Wien getrunken werden” [Examination of the beers that are being drunk in Vienna] by Professor Fr. Schwackhöfer, published in 1876. Underneath the rather long list of analyses (which is great because it gives us other clues; I’ll get back to that), almost at the end of the article, it briefly mentions the system that was used to determine the beer colour: a system called Stammer’sches Farbenmaß.

From what I could find out, the Stammer’sches Farbenmaß [Stammer’s colour measurement] was originally developed to grade the colour of sugars in the sugar industry. It was in use from the 1870’s to as late as the 1930’s. Quite a few similar systems like that existed. In English-speaking literature, it was often called Stammer’s colorimeter. It worked by comparing the solution to be tested(or in the case of beer, just the beer) with a standard glass plate. It consisted of two glass tubes. One tube was filled with the beer (or sugar solution), while the other one was covered with the standard glass plate. Both tubes were illuminated from the bottom, and a prism at the top allowed the user to compare how both the standard solution and the glass plate looked like. You could then lower an glass immersion rod into the solution until the colour and shade most closely matched the glass plate. The measurement of colour was then the number of millimeters you had lowered the immersion rod into your solution.

The tricky thing with Stammer’s colorimeter is that there are two values you can work with. You have the direct reading, i.e. the number of millimeters of immersion, and you have the colour value, which is 100 divided by the reading.

A more detailed description of Stammer’s colorimeter as well as other systems of that time can be found in the Handbook of Sugar Analysis by Charles Albert Browne.

The next thing I then had to find was a way of converting readings from Stammer’s colorimeter to other units. The only source I could find was the brief article “Conversion Curve for Lovibond’s Tintometer and Stammer’s Colorimeter“, published in 1914 by Carl A. Nowak in the Journal of Industrial and Engineering Chemistry. This is great, because Lovibond is a well-known scale that has historically been used to grade the colour of malt and beer, and is apparently still in use to a certain extent to grade malt colour. The article contains a chart that shows the relationship between Stammer’s colorimeter and Lovibond values. 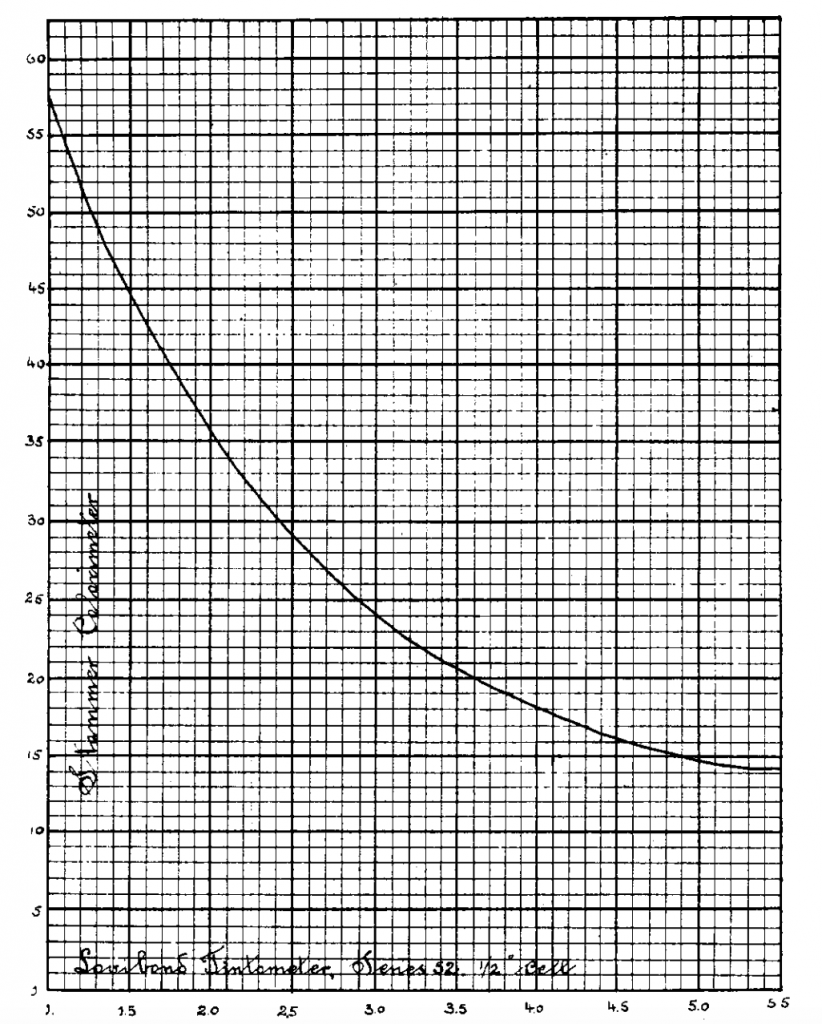 What is noticeable in the chart though is that there is an inverse relationship between these two: higher Stammer values correspond with lower Lovibond values, and vice versa. But what is the Stammer value exactly? We have two available, the reading, and its inverse, the colour value. That’s where the comprehensive list of analyses comes in handy. Not only does it contain various pale lager beers, it also contains colour values of beers that we know are most definitely dark beers, in particular Salvator with a colour value of 41.5, and a bottled Porter with a colour value of 40. So from that we know that the higher the value was, the darker the beer was.

Since the chart indicates that the lower the Stammer value in the chart, the darker the beer, we can derive that the chart contains the Stammer colour value, while the values in the analysis are the direct readings, i.e. the amount of millimeters the rod was immersed in the tested beer.

2 thoughts on “Decoding the Colour of Historic Vienna Lager”