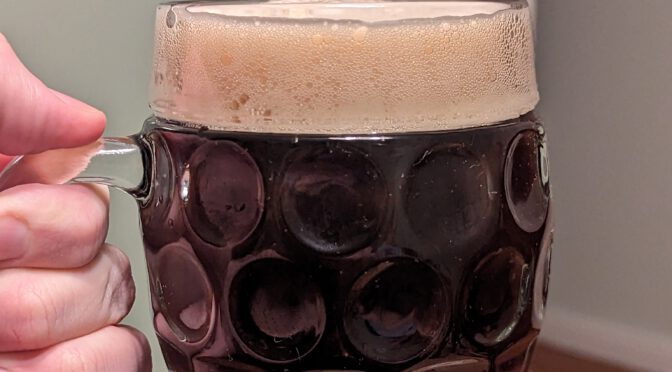 OK, this is probably the clickbaitiest title of a blog post that I’ve ever come up with, but bear with me.

For the June/July 2022 issue of Craft Beer & Brewing magazine, Evan Rail wrote an article about Czech Dark Lager, aka tmavé pivo. I’ve always quite enjoyed this particular style, especially whenever we were visiting Prague, as it is (in my opinion) a very balanced beer type that combines the complexity of flavours of dark kilned and roasted malts with a great drinkability, the kind of balance that other dark beer styles don’t quite achieve. But it is not always hard to find.

Inspired by this article, I noted all the tips and tricks on formulating a recipe and brewing the beer, then developed a preliminary recipe, and got together with my friend and neighbour Ben to actually brew this.

What we brewed in the end had the following grist:

One important technique that was emphasized in Evan’s article was to add the roasted malt (Carafa Special II) only in the lauter/sparge stage. If this hadn’t been mentioned, I would have simply added it to the main mash, intensely boiled it in the first decoction, and probably ended up with a beer with too much roasty bitterness.

In Czech tradition, we chose a double decoction as our mashing regime. We mashed in relatively cold, then pulled a very large decoction which we step-mashed with a rest at 73°C, and then boiled it for 15 minutes until we mixed it back to get to our conversion temperature of 66°C. After a while, we pulled a thin decoction, boiled it for 6 minutes, then mixed it back to get to 73°C. After 15 minutes, we then heated the mash up to 78°C for mash out.

After transferring to the lauter tun, we added the roasted malt to the top of the mash, and started collecting the wort. The impact of the roasted wort is subtle at the start, but will develop over time until we ended up with a dark but still slightly translucent wort.

(As a side note, I find the name Sladek for that hop variety just great; Sladek was developed as a cross of Czech Saaz hops and Northern Brewer hops; Sladek means brewer in Czech, so crossing Northern Brewer with the classic Czech hop variety made it a Czech Brewer – a Sladek; this is my personal theory of why this name was chosen)

After 60 minutes of boiling, we chilled down the wort which had a OG of 13.6°P, even better than the 13.3°P I had planned the recipe for. When the wort had reached a temperature of 10°C, we finally pitched a healthy dose of bottom-fermenting yeast. That was actually a point where we deviated from the tips in the article. Ben had gotten his hands on fresh pitching yeast from a large industrial lager brewery here in Berlin, so of course we just had to use this very fresh, vital yeast instead of using a genuinely Czech strain (which was actually a bit hard to find at the time).

Fermentation went a bit slow, but after 4 weeks, we finally reached our FG of 3.8°P. This may seem high, but a point of the mash schedule was to produce a larger quantity of unfermentable sugars which would keep the FG high and the beer’s body full. After an excruciating 6 weeks of lagering at low temperatures, we finally bottled the beer last weekend, adding just half a liter of wort we had held back as a source of sugar for bottle conditioning. During lagering, the beer had already attained quite a bit of carbonation where CO2 simply naturally went into solution due to the lower temperatures, so not much Speise was necessary.

The final beer probably has about 5.3% ABV, at least that’s what our calculations said. And now look at this beauty:

The beer is dark, but not black. The foam is dense and off-white. And the taste? Just sublime. Better than any of the samples I had taken from the fermenter or even during bottling. If I had been served this in a pub in Czechia, I would have been very happy. There is some roasted bitterness, but it melds nicely with the hop bitterness. There’s a lot of chocolate and coffee going on in there, the body is full but not too full, making you want to drink another one at the end of it (I restrained myself and only had one, as I want to keep more of the beer for Christmas). There are notes of dark malts and caramel malt, but no cloying sweetness whatsoever.

Ben and I then went through the BJCP style guideline’s description of Czech Dark Lager, and the beer seemed to tick all the boxes. The bitterness is certainly on the high side, but I think it only makes it more interesting and adds some complexity.

All in all, we’re both very happy with the result. For me, it is probably the best beer I’ve brewed myself. I’m rather self-critical, and I could not find a single flaw. And I think what got me there were the quality ingredients, sticking to all the traditional methods that I had learned about, and most importantly, not cutting any corners in the brewing process.